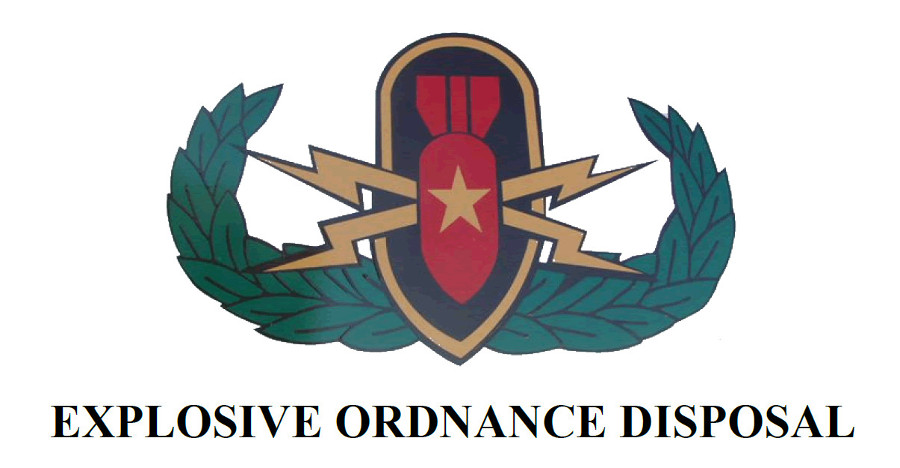 2. Electronic Exploder (Shrike) EES-665: The Electronic Exploder is a light weight two hands fire and press operated electronic exploder. Also referred as Shrike; it can fire four load circuits. It replaces old Exploders like Dynamo Condensers and Safety Ohmmeter. It can check continuity of firing circuit before fire. The model is small and silent in use.

3. EAD-20 Recoilless Disrupter: EAD-20 is a 20 mm bore recoilless Disruptor designed for disrupting the IEDs with a high probability of avoiding detonation. It answers for requirement of a medium powered and accurate disruptor. The disruptor can be employed with a multitude of support arrangements like its stand or on a EOD robot mount. The disruptor design pays special attention to simplicity safety and speed. Recoilless operation is achieved by ejecting water load rearward at the same time as the forward load.

4. EAD-254 Water Disrupter: EAD-254 series disrupters are designed as a means of disrupting IEDs. There is high probability of avoiding a detonation or explosion of IED on its deployment. These are light weight and medium caliber disrupters capable of being fired remotely. The complete disrupter is constructed with high strenght stainless steel. The complete disrupter with its stand and accessories are supplied in strong cordura outer pack with carrying straps.

6. Capability Enhancements EOD Robots: EOD robots are versatile platforms and the applications of different users can vary based on the threat. Various multiple attachments to enhance the capability of any robot are offered.

7. Non Magnetic Anti-Spark Tools: The non-magnetic Safety kit has common tools with Beryllium-Copper material (non-magnetic) and with non-sparking features. The kit is suitable for safe working during the Bomb disposal activities and for tasks like working in a gas station or places where fuel fumes and explosives atmosphere exists.

8. Hook & Line Kit: Hook and Line kit provides a bomb technician with a wide range of equipment/tools that can be deployed to gain access, to remove, manipulate and handle a suspect item. This kit is a vital part of EOD ktis for any semi-remote IEDD operation. The kit consists of various hooks, ropes, pulley, lines, hanging ring, rod, clamping device, multifunction tool clamp, sling and so on. The kit has been developed with the inputs of various EOD operators and their experiences. These kit provide great flexibility with various options to handle the IED. An experienced EOD team can quickly construct a hook and line mechanism that enables the team to investigate and facilitate detonation and/or removal of suspicious materials with safety.

10. EOD Hardwired Comm System: EHW-13 is a programmable, micro-controller based, single-channel intercom station for use as bomb suite wired communication system. When used with mono headset, the EHW-13 allows full-duplex single channel voice communications. The system can be tailored made to adoptable with most international EOD suits.

11. Body Cooling System for EOD Suit: ECS-2 Body Cooling System is an autonomous ice reservoir chilled water circulation cooling system. The system is designed primarily for the EOD operators. During the EOD/IEDD and mine clearance operations, the protective suits, worn for personal protection against blast effect, prevents the body from cooling itself naturally. The ECS-2 is designed to be worn as a tube sewn under garment, over which an EOD, fire or any other suit is worn. Different tests have shown that the EOD suits worn with the cooling system regulates the body temperatures.

12. Armored Bomb Disposal Helmet With Visor: The bomb disposal helmet is made of a GRP skin with an elastomeric aramid core and is fully adjustable to fit various sizes by means of the three point suspension and the removable spacer pads. Communication system consisting of a headphone and microphone. Hardwired communiation system or the operator an extension lead can be attached to any VHF radio transceiver. Also incorporated in the helmet is an air ventilation system which directs the flow of forced fresh air over the top of the helmet liner, across the visor and down over the operator’s faces ensuring efficient demisting and clear view. An NBC canister can be accommodated to the helmet.

Robotic Telescopic Manipulator: EMAN-02 robotic manipulator allows EOD/IED operators to manipulate suspect devices and objects at a stand off distance of 3 meters. Tube sections are fully telescopic, with a powered claw at the operating end. The claw has a frangible joint, it will brake in case of an unplanned detonation. The claw opens, closes and rotates under powered control.

14. Pump Action Shot Gun PAF-1: PAF-1 Pump-action shotgun, also called “slide action repeating shotgun” is a specialization at ECI. This weapon has a single barrel into which cartridges are chambered by pulling the pump handle and spent cartridges are expelled by the same sliding action. The shots capacity is on the requirement of the customer. The guns made at our factory are light weight, high strength and long life materials. Pump-action guns are used for IED for breaking items from a distance like in case of car bomb. Gun is recognized internationally test from Birmingham Proof House.

15. BD UC05 Cable Detector: BD UC 05 Cable Detector is designed to detect surface or buried command wires used to initiate Command Wire Improvised Explosive Devices (CWIED). It is a very effective tool for Counter Terrorist Search (CTS) operations and for route clearance for the convoys. The detector has been designed for use by suitably trained and equipped teams in Counter Improvised Explosive Device (CIED) operations. The system has a 39 cm detector head assembly with sensors installed. A center shaft assembly (60 cm) carries the detector head and the angle of the detector head can be changed for comfortable operation.