CSSPakistan is proud to be associated with Brainwave Science – a thought leader at the forefront of emerging and sophisticated technology – to bring you iCognative as part of its suite of products.

iCognative is a scientific tool which measures and reads the brain’s involuntary electrical activity in response to a subject being shown stimuli relating to a crime. This technology has been tested by world-renowned institutions and security agencies.

Forensic science is constantly evolving — from the discovery of unique human finger prints to the development of DNA profiling, with its ability to match a suspect to a crime. There’s only one problem. Fingerprints and DNA evidence are uncovered in only 1 – 2% of all cases. And DNA fingerprinting can only be successfully applied when investigators collect and preserve fingerprints and biological samples in a time- consuming and expensive labor- intensive way.

iCognative by Brainwave Science takes forensic science to the next level… by pinpointing and charting the very origin of deception, stored within the brain.

This new forensic advancement that can permanently transform the way suspects are convicted or freed. Consider this: what if law enforcers could tap into a suspect’s mind and “read” the invisible clues that link him or her to a crime? Science fiction? Hardly! It’s called iCognative and through it, investigators can identify or exonerate suspects based upon measuring brain-wave responses to crime-related images, words or phrases (stimuli) displayed on a computer screen. This astounding new technology – tested by several U.S. federal government agencies and found to be over 99 % ACCURATE–is the latest in technological crime solving, providing an accurate and reliable process to conduct criminal investigations without invasive procedures and biases. Fast and cost-effective way to determine the truth The principle is simple. It has long been established that memory centers of the human brain respond to the sight of familiar stimuli with a distinct change in electrical activity. The brain waves cannot lie.

As a result, iCognative is fundamentally different from polygraphs; it depends only on brain information processing, not the emotional response of the subject. Identifies the guilty…exonerates the innocent. Just as science matches fingerprints from the crime scene with a suspect’s own finger prints, and DNA matches biological samples from the crime with the suspect’s own DNA, iCognative matches information from the crime scene with information stored in the subject’s brain repository. Even though there is no way to completely stop crime, iCognative can help ensure that more crimes are solved by revealing whether a suspect possesses relevant information. The knowledge that such an ingenious, accurate and scientific technique exists may very well serve as a powerful crime deterrent.

iCognative provides investigators with a revolutionary state-of-the-art weapon to fight terrorism. Measuring the brain’s response to stimuli has been demonstrated to be over 99% accurate in detecting EOD/IED bomb knowledge, uncovering high intelligence value individuals, and establishing links between a suspect and known terrorist networks, places and events. iCognative is invaluable when used to:

The iCognative System is portable and easy to use in just about any working environment. Software modules are incorporated into the computer and the test is run by a trained facilitator. A suspect wears a headset equipped with EEG sensors to measure the electrical responses to stimuli flashed on a display screen within a fraction of a second. The brain responses are then tested through viewing three different kinds of information. The brain responses are represented here by different colored lines. 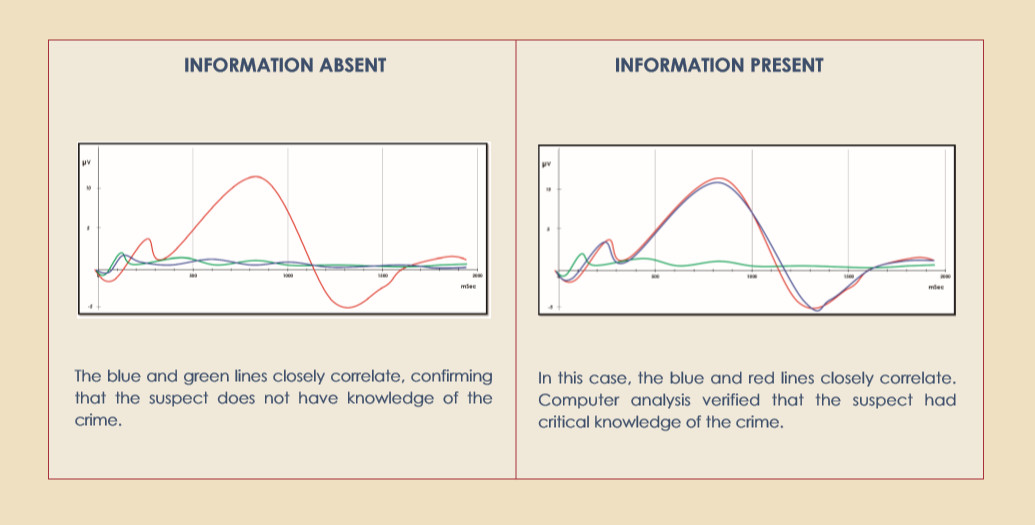 — Red: Information that the suspect knows, whether or not he committed the crime.

— Green: Information not known to the suspect.

— Blue: Crime-relevant information only the perpetrator would know

If the suspect recognizes the stimuli displayed on the screen a response will occur. The digital signal processor digitizes these signals and feeds that brainwave data into the application for further analysis. The data is then analyzed with a proprietary algorithm that computes the result. The Results showing statistical confidence in percentage are displayed at the end of analysis in two categories: “Information Present” or “Information Absent.”

Correctly place the wireless headset, which uses sensors (electrode) to collect the brain responses from the scalp and muscle movements.

A series of crime or event specific, relevant and irrelevant stimulus in the form of words, phrases, or pictures are flashed on a computer screen.

Collect brainwaves for each trial of words, phrases, or pictures in the form of EEG signals which are recorded in the system.

Brainwaves are analyzed with proprietary scientific algorithms to determine whether the information is present or absent.

iCognative is a forensic tool that can objectively determine whether an individual possesses concealed or privileged information related to a specific crime, terrorism, intelligence, significant event, or other types of specific information.

The fundamental difference between the perpetrator of a terrorist act or crime and an innocent person is that the perpetrator, having committed the crime, has specific knowledge of the crime stored in his brain. An innocent suspect does not. Similarly, a terrorist mastermind or trained terrorist has specific terrorism-related knowledge stored in his brain. This is what iCognative testing detects, scientifically and accurately. Words, phrases, or pictures relevant to a terrorist act, crime, terrorist training, or specific knowledge or expertise are presented on a computer screen, in a series with other, irrelevant words, phrases or pictures. A suspect’s brainwave responses are measured non-invasively using a headset equipped with EEG sensors. A proprietary computer program then analyzes the data to determine if the crime-relevant information is stored in the brain. A specific “P300” brain response is emitted by the brain of a perpetrator who has the details of a crime stored in his brain, but not by an innocent suspect lacking this record in his brain. This is proven by extensive peerreviewed, published scientific research.

3. Why is it called iCognative?

4. What does an iCognative test determine?

iCognative test determines scientifically whether or not specific information is stored in a brain. In the case of a crime, we use information that would be known only to the perpetrator and the investigators, and not to an innocent suspect. The system makes a determination of “information present” or “information absent,” and computes a statistical confidence for the respective determination. This is done by a mathematical algorithm and does not depend on subjective interpretation of the data

5. How accurate is an iCognative test?

iCognative testing has proven to be highly accurate including actual criminal cases, tests on intelligence agents and tests on military medical experts. In all but six of these cases, the system produced a determination of either “information present” or “information absent.” One hundred percent of these determinations were correct. The discovery of the P300 allows the results gained through the P300 testing to be even more accurate. Since the inclusion of the P300 in the brainwave analysis algorithm, iCognative testing has made a definitive determination in every test.

6. What is involved in setting up an iCognative test?

In a criminal case, information gathered from investigations is utilized to identify those details of the crime that a perpetrator would had to have encountered in the commission of the crime; details that the brain records and remembers. There are certain kinds of crime details that are insignificant in a usual crime scene investigation, but which become very significant in an iCognative test. These include things a perpetrator would remember doing or encountering in the course of committing a crime, such as knocking over a pink flamingo on the lawn, running through tall grass, what type of weapon was used, etc. Once we have gathered a significant number of memorable details, we determine which of those would be known to the general public (via press reports, etc.) and which would be known only to the police investigators and the perpetrator of the crime. From this information an actual iCognative test is constructed, including targets, probes, and irrelevant stimuli.

7. Where can ICognative be applied?

It is applicable in all cases where evidence is available, delivering the highest value to law enforcement, counterintelligence, and counterterrorism agencies. Experts identified that iCognative is applicable in 85-90% of the situations. iCognative can be utilized in all types of criminal cases, counterintelligence cases and counterterrorism cases. It quickly and accurately identifies if the individual in question committed the crime and who did not commit the crime. It can determine all levels of individuals involved in a terrorist organization from the foot soldier to the communicators and planners to the mastermind. It also effectively and quickly identifies if a witness is telling the truth or if an asset, source, or informant is providing accurate information to law enforcement personnel

8. In what kinds of cases does ICognative testing not apply?

In cases where investigation is conducted and evidence collected, iCognative can be applied. Security experts attest that iCognative is applicable in 85 – 90% of the cases. There are several types of cases where this technology does not apply. For example, in a disappearance, all the authorities may know, is that someone disappeared. They may not know if any crime has been committed. iCognative would not be applicable in this case. Another situation where iCognative testing is not applicable is when everyone agrees on what happened, but there is disagreement as to the intent of the parties. For example, in a sexual assault case, the alleged victim and the alleged perpetrator may agree exactly on what happened, but disagree on whether or not it was consensual. iCognative tests cannot reveal the intent of those involved in the case.

9. Why are the results of the iCognative tests more accurate and reliable than a typical lie detector test?

iCognative technology and polygraphs have their foundations in separate fields of science. iCognative technology is rooted in cognitive psychophysiology, the measurement of information processing activity in the brain. The polygraph measures emotion-driven autonomic responses such as blood pressure, heart rate, respiration rate. iCognative testing and polygraphs are also applicable in different situations. The polygraph may be used for general screening, when the investigator does not know specifically what he is looking for. iCognative testing is applicable in criminal investigations and for specific screening. It is useful when investigators know the specific details of the crime or specific training under investigation. The largest differentiating factor between a polygraph and iCognative is that the latter technology effectively eliminates false positives or false negatives because neither the examiner nor the subject is able to enact countermeasures throughout the testing process. The brain is scientifically incapable of lying as it involuntarily reacts to a stimulus in a matter of .3-.4 seconds–an uncontrollable and consistent response that is produced by the brain.

10. How is the license scheme for the software managed? Is this done in the software? At what point is one use determined by the system?

Call Capital Services System now at +92 51 2110 525 or send us an email at: info@csspakistan.com to know more about iCognative.